Since today is Monday and many of my devoted readers are at IOUG Collaborate 2013 (C13DEN) I decided to post one of my more lighthearted stories. It’s a harrowing tale of how I was a victim of ninja trickery — no, let’s not mince words, it was a strike — at my local Wegmans. If you’re only here for the technical stuff (coming soon to a blog near you) I apologize, but some stories must be told.

Today I was the victim of a ninja attack. If you’re one of those naysayers who don’t believe the ninja walk among us but conceal themselves to shady bars in the darker parts of Tokyo, you may go but know you have been warned. If you understand the severity of the ninja threat, read on.

So I was shopping at Wegmans, which I now regard as a hotbed for ninja activity. It is a chaotic large grocery store with many aisles and stands which are perfect for cover, and metal beams crisscrossing the roof which everyone knows will be used for transport of ninja soldiers. I had come with a list and was down to my last two items. The cart was relatively full, stocked with a variety of unique goodies that could not be easily mistaken for any other cart. I went down the ice cream aisle, intent on finding Rice Dream Ice Cream for my daughter. 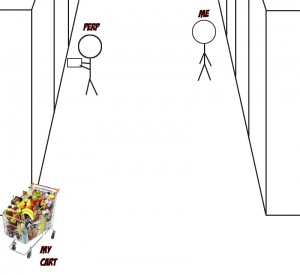 Here’s the setup: I leave my cart at the end of the aisle, and walk down toward where the organic ice creams are. There is a man across from me, nondescript, blue jeans, a faded t-shirt, no one that you would remember. As I turned to the frosted doors to begin my search, I heard the dull slap of a dropped box of ice cream, and turned to look. The man stood there, looking down at a bland box of generic ice cream pops. So generic, in fact, that the makers of them didn’t even have the heart to call them ice cream pops; instead they were “Frozen Treat Pop Product” or something like that. The man didn’t look toward me, he didn’t bend to pick them up in shame, he just looked at the frozen product on the ground. Losing interest, I continued looking for my daughter’s ice cream, couldn’t find it, and walked toward my cart.

The cart was not there. I was the victim of cart theft. Petty cart theft, but cart theft nonetheless. It’s something you hear about but never really believe…who would steal a cart?

But steal it they did. I looked around the store for a good ten minutes, going up and down aisles, giving every cart I passed the hairy eyeball, glaring down old women and couples and little kids. But my cart was nowhere to be found. Finally I decided my only action could be to start my shopping excursion all over and get a new cart. So I did.

I took my empty cart to the first item on the list once again, which were apples. I looked down at the apples and picked a few which were okay but obviously not as good as the glorious red delicious fruit I had picked out previously. Finding a few to bag up I turned… and my cart was sitting right next to me. The old cart. With everything in it…plus the generic box of frozen ice cream pops sitting in the top basket. I considered the basket with new suspicion, and realized that something was very wrong, something far more sinister than a simple petty cart theft. But what happened then was even more disturbing. I put the frozen ice pops in the empty cart, triumphantly turned my old cart around to get my final items, turned…and the cart with the ice pops was gone. Vanished. Nowhere to be seen.

Ninja. The word reverberated in my head. I felt a little dizzy. I was not ready for this.

Getting my final items I went to the check out counter. The lady asked if I found everything okay and I told her my tale of weirdness. She laughed and said that people accidentally take carts. That poor naive woman. She had no idea. She finished checking me out, bagged my items, and I walked to the back of the cart to finish this strangeness once and for all. Turning the cart to the right to leave the check out lane, I found it blocked.

Blocked by a cart with nothing in it but a box of Frozen Ice Pops.